It’s ironic how fast time seems to pass by, considering we move through life at an average speed of 5.5 miles per hour. We are half way through our year, and our time in French Polynesia is officially over. We spent our last month sailing through the Society Islands: Tahiti, Mo’orea, Huahine, Raiatea, Taha’a and Bora Bora. When tourist agencies promote Tahiti, the images you see are most likely white sand beaches, turquoise waters and bungalows of the Societies. I’ve been asked already which was my favorite island and although I’ve had time reflect, my initial response remains unchanged: all of them. They had similar features yet distinct personalities, and we “found a piece of paradise everywhere we went”.

We were mesmerized by the islands’ features

The Society Islands are geologically striking. Although they have distinctive features and personalities, each island is surrounded by a reef encasing a lagoon with infinite shades of blue and lush green majestic peaks that rise within. Mo’orea, Raiatea and Bora Bora’s sharp mountains were just as stunning as the Marquesas. Development seems to be limited to the coastline and over water. The mountainside seems to remain undisturbed, and we can’t help but wonder how much has actually changed since Captain Cook first made landfall.

My niece was 3 years old when I recorded the most adorable video of her talking about “play-dough blue.” Or as she pronounced it: baa-loo. In it, she tells you how she decided to drop her play-dough into water and make “sopa baloo” despite her mom telling her that was a bad idea. I’ve watched the video a thousand times, so much so that as we sailed around the northernmost edge of Huahine, I found myself quoting her as I was struck by the richness of the ocean’s baa-loo. The richness and variety of hues of blue, from out in the deep sea to the shallows around over-water bungalows in the Society Islands is simply ridiculous. The lagoon in Bora Bora is so densely turquoise that the color reflects back onto the bottom of incoming puffy clouds. Royal, indigo, aquamarine, emerald, turquoise, sapphire, lapis-lazuli, azure … I can imagine a marketing professional being tasked with finding 10 different ways to describe these waters. 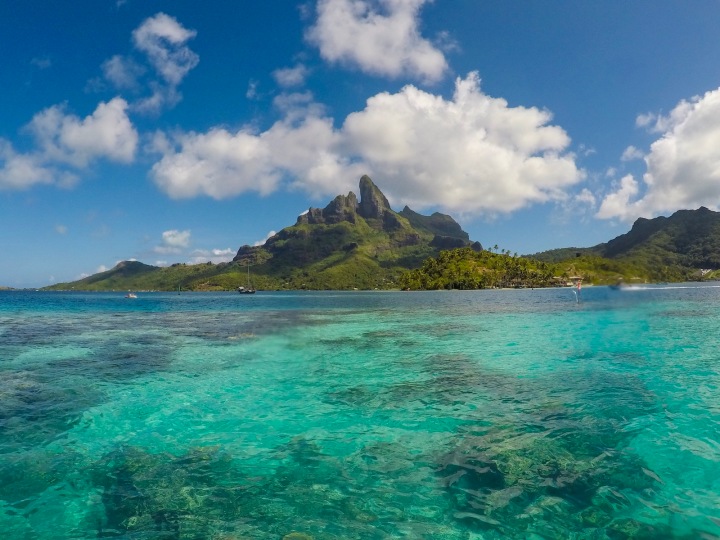 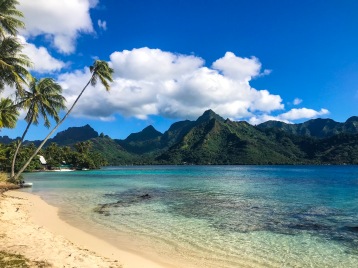 As to be expected, we spent a considerable amount of time underwater. We swam with Sting Rays in the shallow waters of Mo’orea and Bora Bora. We encountered 4 spotted eagle rays up close at motu Nao Nao in Raiatea. We dove along an enormous Manta Ray in the coral gardens of Bora Bora.
We drift snorkled the ridiculously clear waters behind Motu Murimahora in Huahine. We mazed through the coral gardens of Taha’a.
…and then some. 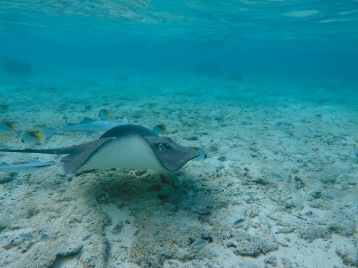 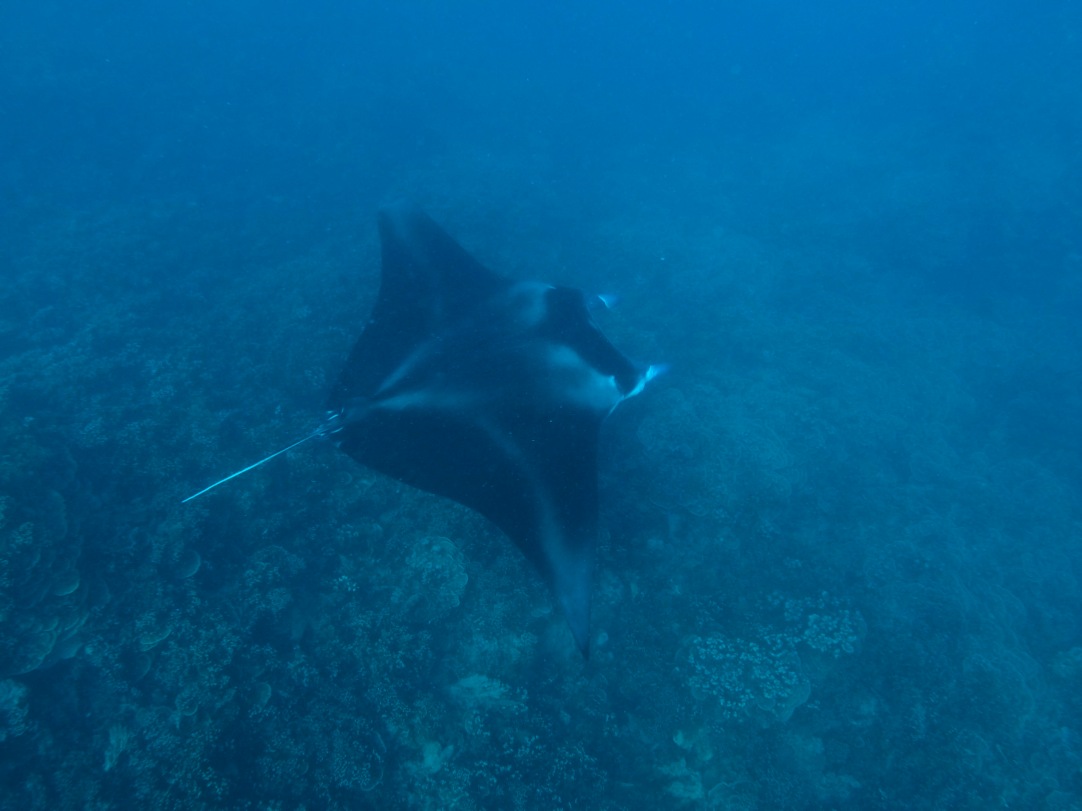 We experienced their culture

The people of Polynesia are so nice. Everywhere, really. A woman in Nuku Hiva gave me one of her dozen eggs when she saw my distraught face upon finding they were all gone. This graciousness and generosity followed us to our future destinations. In Tahiti, we met a generous local who drove us into town, helped us run our errands, translated for us at the hardware store and showed us around downtown Papeete. For no reason other than to meet and help travelers. His name was Polynesian for “big traveler” and he wore his name proud. When I asked him about his favorite place he said “I find paradise in every place I go”. In Taha’a a renowned chef taught me how to make his signature vanilla bean sauce. In Bora Bora, a local woman who resides at the base of the island’s most strenuous hike jumped from her living room to give us a point-by-point safety talk and bless us on our way. Everywhere we walked we were greeted with a smile, wave and a kindhearted “Ia Orana”.

Outriggers are a huge part of Polynesian life. We saw them daily, from Hiva Oa to our last days in the Societies. One-person, 3-person, 6-person, manned by all men, all women, mixed gender, adults and kids. From sly looking racers, to rustic wood-meets-rope versions. Out at sunrise or past sunset, paddling hard and moving fast. We were having our coffee anchored in Mo’orea one morning where out of seemingly nowhere a band of 10 outriggers, manned by teenagers, approached our boat. It seemed like Polynesian PE, and they were clearly using Bravo as a rounding marker. One outrigger with three teenage boys tipped over (and over and over), one with three girls looked like certified badasses, most looked completely uncoordinated. When jet skiers pass this close to Bravo I have to exercise restraint to avoid yelling “get off my lawn!” but outriggers were always a welcome sight. 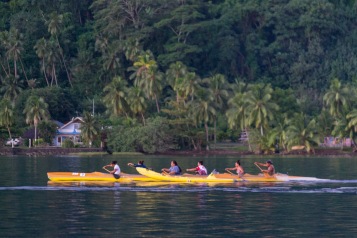 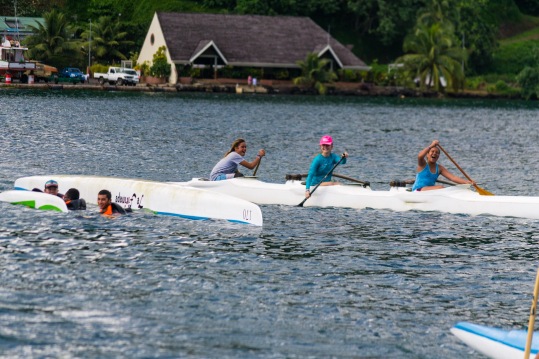 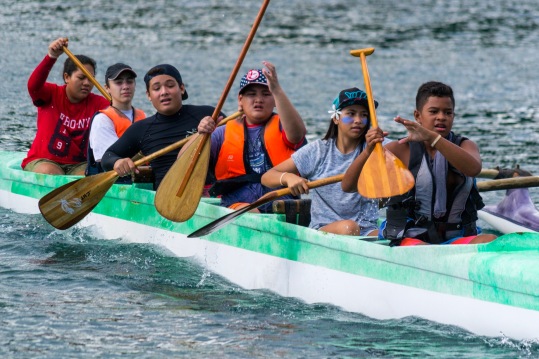 I participated in a dance class in Nuku Hiva with two fellow sailors. It was hysterical and I have never felt so white (I’m not white). Their hip movements are mesmerizing and this class was a version of Zumba on steroids. We gave shaking our hips an honest try but flopped miserably and I wondered if this is how my husband feels like when dancing at Costa Rican weddings. Taught at an early age, and clearly proud of their heritage, these ladies were prepping for Heiva, a dance festival that takes place across Polynesia in July. For a month, districts compete in traditional Polynesian sports, song and dance. Weeks before we could hear the distinctive powerful drumbeats in the distance as teams were preparing for their moment onstage. Right before our visa expired we were able to catch the beginning of Heiva in Bora Bora. Captain James Cook described their dancing as “indecent” which probably had something to do with the proper nature of 1700 era European folk. Powerful, rich in symbolism, ornate, energetic, beautiful and one hell of a workout is how we would describe it. Their movements are so impressively rapid, my pictures look like a sea of chaos. Needless to say, we loved it. 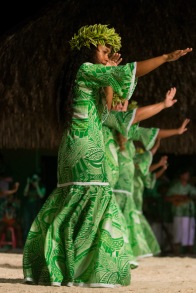 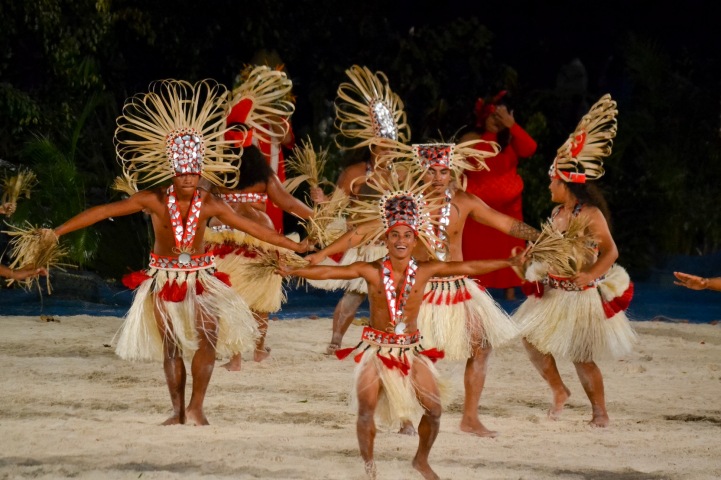 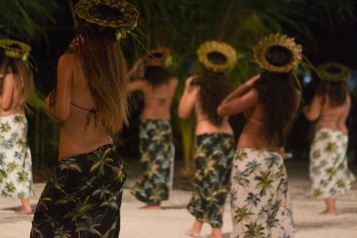 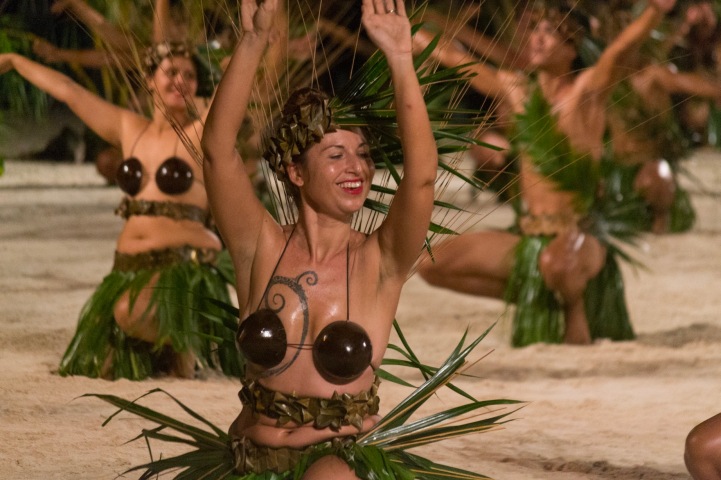 We visited two large mara’e (traditional temples), in Mo’orea and Raiatea. Mara’e are religious sites built from basalt blocks placed side by side and piled up. They represented the equivalent of temples, and were places of worship, burial and human sacrifice. In Mo’orea we hiked up Opunohu Valley towards the infamous Belvedere lookout, a spot up top where you can get a stunning view of Mount Rotui (899 m) and surrounding Opunohu and Cook’s bays. This was one of our favorite hikes, made better by the company of two adventurous Canadian sailors we serendipitously re-encountered on an ice cream break at the Lycée Agricole. On the way down, we followed them through a single-track path weaving through historic rock structures. Much of the Opunohu Valley was dotted with marae, dwellings, council platforms, archery platforms and other structures, some of which have been restored and maintained. After parting ways with our new friends we followed the very well marked network of x-terra trails through pineapple plantations. 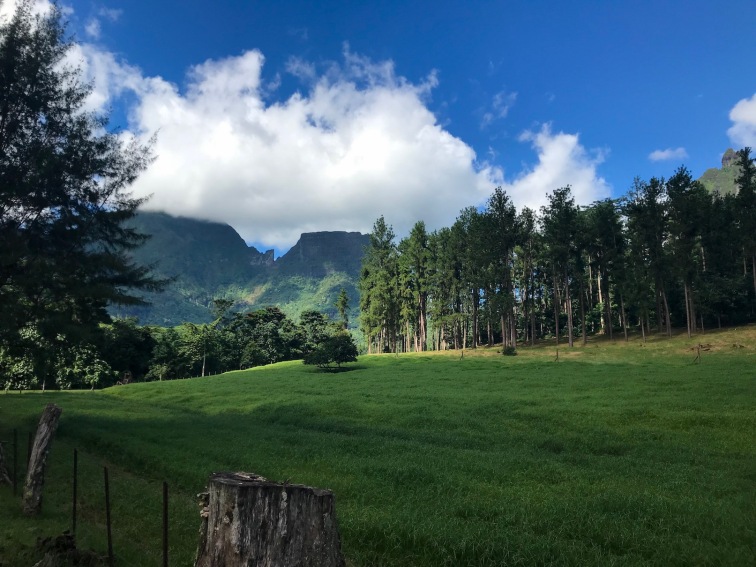 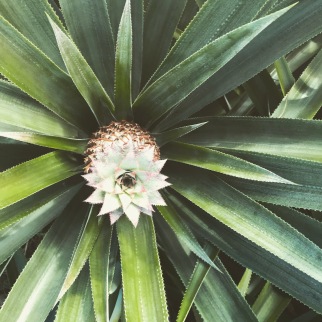 Ra’iatea, “The Sacred Island”, is home to Mara’e Taputapuatea, the biggest mara’e in Polynesia. Ra’iatea was considered as the cradle of their thousand-year-old civilization and Taputapuatea had significant importance in Polynesian religion. Expansive and highly restored it sits right on the coastline, with a beautiful beach to boot. This site dates from the 17th century and its influence was international. Chiefs from all over Polynesia, including the Australia, Cooks, and New Zealand came here for important ceremonies. 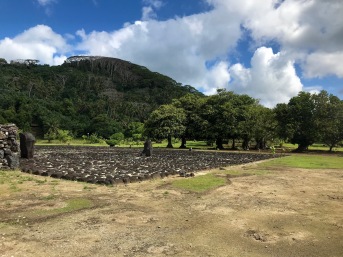 We tasted their local cuisine

When I think back at Polynesia I will most likely remember fresh baguettes and New Zealand canned butter – the delights of sailors on a budget. Being the dirtbags that we are, we tended to venture out for the cheapest meals and interestingly enough found our fare share of affordable burgers, thin crust pizzas, and chow mein in the infamous roulettes (street cars), an interesting mix of culinary cultures. Andy had a chow mein sandwich (yes, noodles stuffed inside a baguette) at the downtown Papeete farmers market, an oddity he found spectacular. (If tortillas weren’t worth $9 for an 8 pack over here I’m sure he would make chow mein burritos a Bravo staple).

Street fare aside, my go to when possible was poisson cru. This local version of ceviche in fresh coconut milk is amazing. My friends across Latin America all think the ceviche from their country is the best one (I’m just as proud of my own). No offense to my own people, but I reckon the Polynesians have us all beat.

In her book “What I Was Doing While You Were Breeding,” Kristen Newman tells us to “do the thing you are supposed to do in the place you are supposed to do it.”
So when visiting Taha’a, “the vanilla island,” we ate a vanilla meal. Approximately 80% of French Polynesian vanilla is processed in Taha’a, and a visit to a small family-run farm left us with a keen understanding as to why vanilla beans are so expensive (it’s a +13 month process and everything is done by hand!). Taha’a Maitai restaurant in Haamene Bay is known around sailing circles and beyond for boasting the best food on the island. I dare to say the best in Polynesia. We met Bruno, chef and owner, who greeted us at our table, shared his stories, and fed us tuna tartare, pork in coconut and a fish in vanilla sauce by which culinary dreams are made of. Mine at least. 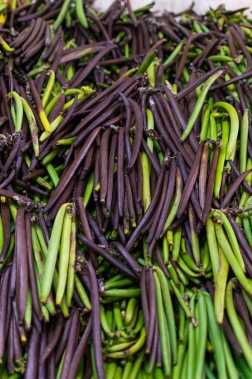 We chilled out in the chillest of islands

We spent a considerable amount of time in Huahine, mostly because there was no reason to move. This low key, sleepy, charming, authentic island seems to be devoid of the hordes of tourists encountered elsewhere. Huahine is in fact two islands (Huahine Nui and Huahine Iti) connected by a short bridge. It’s named after the silhouette, resembling the body of a pregnant woman, formed by a mellow ridge near the main town of Fare. We anchored behind Motu Murimahora, in the shallows of Bourayne Bay, in remote Avea Bay, and near the main town Fare.

We were by ourselves for most of the Societies until the rest of our buddy boat posse caught up with us in Bora Bora. My surrogate sister and her husband came to visit us too, so after a month of being by ourselves, we were ecstatic to see our friends. 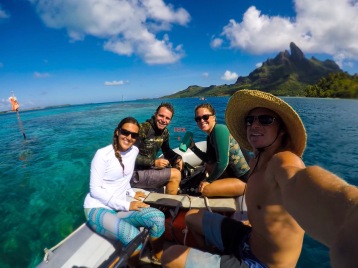 The Latitude 38 Tahiti-Moorea rendezvous was happening at the same time, so we decided to have our own. Keeping up with Wolfpack tradition, we inflated our pool toys for a second flotilla, complete with a race around Bravo. It was a tight race but in the end Bravo’s Rock Lobsta’ took the win from Sedna’s Tortuga. 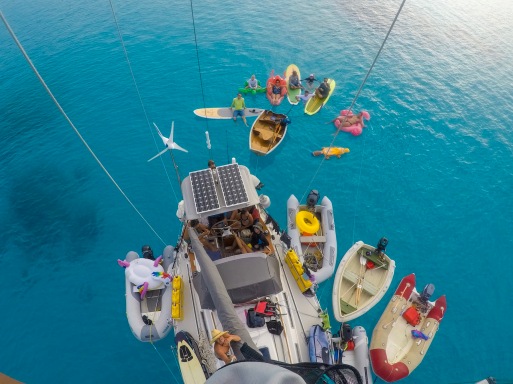 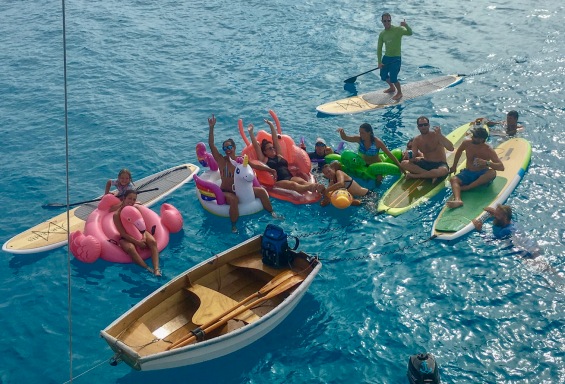 We had a great time in French Polynesia, a perfect introduction to the South Pacific. Unfortunately, it’s now time to move on. Onwards and forward to Nuie we shall go.

Until next time,
Bravo out